The 51st Anniversary of Apollo 13 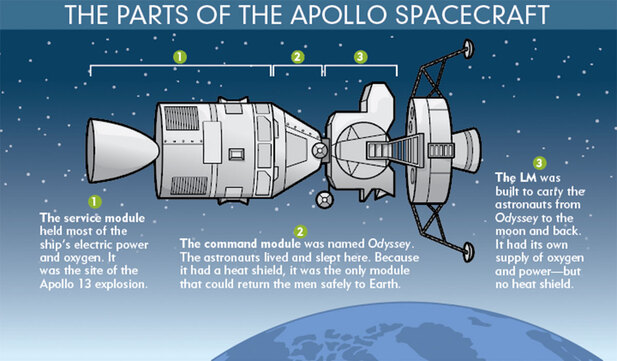 Among the many limitations that the crew had to make do with, were lifeboat consumables, oxygen supply, lithium hydroxide to remove carbon dioxide and survival power level. The Apollo 13 investigation revealed that the heater and protection thermostat were changed to 65 volts from the original 28-volt DC bus, with the  intention of aiding the pressurization within the tanks more rapidly. The thermostat was never upgraded to accommodate the higher voltage.
The initial malfunction began during the second-stage boost. The center engine shut off 120 seconds earlier to avoid a collision with the pogo oscillations. The 16 hertz, 68g vibrations resulted in flexing the frame of thrust by 76 mm.
The other four outboard engines were made to burn longer and this caused pressure fluctuations and eventually an engine shutdown. The crew used a helium gas reservoir to dampen the pressure oscillations, but at a distance of over 200,000 miles from Earth, an oxygen tank exploded. The damaged insulation resulted in a fire and the tank dome failed.
On April 13th, three days into the mission of Apollo 13, an incident occurred which altered the mission from a routine flight into a race for survival. A sharp bang and vibration indicated the loss of two of Apollo 13's three fuel cells, which were the spacecrafts prime source of electricity were heard and experienced by the crew members. Thirteen minutes after the explosion, a crew member observed oxygen gas escaping at a high rate from the second, and last, oxygen tank.
The crew and ground controllers knew that they would lose all oxygen, which meant that the last fuel cell would also die. With only 15 minutes of power left in the Command Module, The Mission Control told the crew to make their way into the Landing Module. Which was designed for only 45-hour lifetime, whereas it had to be stretched to 90 hrs.
Power was thought to be of a concern as there would be insufficient power to return the ship to Earth. Water was the main consumable concern and so was removal of carbon dioxide. Besides the lack of food and water, the trip was marked by lack of sleep because of the cold. In order to conserve batteries the electrical systems were turned off, subsequently the spacecraft lost and important source of heat and the temperature dropped to 38 degrees Fahrenheit leading to condensation on all the walls.

On re-entry to the earth, everybody at Mission Control feared for the heat shields and hence the crew were advised to retain them. Four hours before landing the crew let go of the service module and three hours later the crew splashed down gently in the Pacific Ocean near Samoa.
Apollo 13 may have been one of the most carefully watched mission of the entire space program, in spite of the fact that the mission was aborted. For four days, right from the first news of the accident through to the final tense moments of the reentry blackout, people across the nation and from all over the world, followed the story in their papers, on radio and television. Everyone waited and watched with bated breath to see if the crew would make it back home safely. It was a testament to the hard training and practice of the astronauts that they got their crippled spacecraft home, completely unaware of the attention being given to their situation.

The documents for GULFPEX 2021 are listed below.